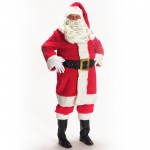 I’d been very good in 2011. I tidied my room whenever I was told and always ate my greens without complaint, except for sprouts of course but that goes without saying. Father Christmas was very happy and said (s)he’d bring me something special: an e-book reader. Unfortunately, Father Christmas gets confused by anything more technical than the TV’s remote control so (s)he asked me to choose which one was best.

In the UK we have two frustrating problems with technology: it’s overpriced and often it’s not as readily available. Americans can choose from a bucket load of e-readers. You have numerous e-ink Kindles and the new Amazon tablet, you have several models of B&N’s Nook, there’s the Sonys plus many, many others. For us Brits, we have two, bottom of the range, non-touch Kindles (with or without keyboard) and the touch screen Kobo which WHSmith’s started to sell in-store late last year. And that’s it. More of a coin flip that a choice.

“No-one ever got fired for buying IBM…”

Now, one thing I should admit, is that I always tend to support the under-dog, a very typical British attribute. I don’t like to see big guys pushing their weight about and people mindlessly following without considering the alternatives. For this reason, I’ve never bought Apple products; not because I don’t like them, it’s just that I prefer the alternatives. For example, Father Christmas has an iPhone 4 and it’s a very nice phone but I much prefer my Android HTC Sensation. I love my Zune MP3 player and my Acer netbook is exactly what I needed. I didn’t consciously shun Apple, it’s simply that the alternatives suited me better.

I mention this, because I often hear the same one-horse, no alternative argument being used by those who buy Kindles. Post Christmas sales figures would agree with this, they show that Kindles were a soaring success. Over a million e-book readers were sold in the UK over the 2011 festive period and a staggering 94% of these were Kindles. Jeff Bezos, I suspect, may be smiling quite broadly right now. 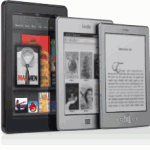 I agree that Kindles are nice little e-readers. I’ve used an old keyboard Kindle and found it to be a great device. The screen is excellent, the design slick and the choice of books is second to none. The new Kindle definitely looks better than its predecessor and the lack of the dedicated keyboard doesn’t hinder its use. If you like reading and like variety in what you read, then you can’t go wrong with a Kindle.

So, having said all that, you may be surprised to hear that I asked Father Christmas to slide down my chimney with a Kobo Touch in his sack. Father Christmas didn’t mind, the prices were pretty much the same, the Kobo was only £10 more, and they come in pretty colours so (s)he and my daughter like playing with it as well. 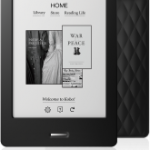 The main advantage for going with the Kobo is stated in the product’s name, Touch. Whenever I use a non-touch device these days, I find myself poking the screen and, to the amusement of anyone watching, waiting patiently for something to happen. Well designed touch screen interfaces can make the user experience so much more intuitive, and the Kobo’s is excellent. My eight year old daughter loves flicking through some of the fairy tale books I’ve downloaded when we’re in the car, it is that easy to use. To me, this was the clincher.

In other respects, the devices are pretty similar. The e-ink is the same, the responsiveness is comparable and so is the capacity. Yep, the Kindle has better book availability, but the Kobo is good enough. Sure, the Kindle has audio support, but I’ve got a phone with an Audible app. The Kindle has better magazine/paper coverage, but again, that doesn’t interest me. So for me, the Kobo was the perfect choice and has been an excellent device which I’m very, very pleased with.

As an aside, I’d read several reports from the Wall Street Journal and others which claim people with e-book readers read more than their paper-based counterparts. I was sceptical about this, but having now got a device, I totally agree. I’ve read three novels in a fortnight, which is considerably more than I would’ve otherwise. This could partially be explained by the ‘new toy’ mentality but e-readers do give more freedom, and not just because of the reader, the technology itself is liberating. 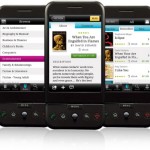 Both the Kindle and the Kobo have smart phone apps which sync with the e-reader. So if I read a few pages on the reader before snuggling up beside Father Christmas in bed, the next day I can seamlessly carry on reading on my phone during the lunch break at work. This continuity allows me to read a book when I want, where I want, without having to wedge a cumbersome paperback into my back pocket, and this flexibility is definitely encouraging me to read more.

In conclusion, regarding the devices, if you’re thinking of an e-book reader, consider the Kobo. Kindles are a good choice, but they aren’t the only choice. If you are a mobile person and enjoy reading, definitely get a Kobo or a Kindle. I can guarantee you won’t regret it.